At the foot of Mt Canigou, Saint-Michel de Cuxa displays its bell tower, its church and its Romanesque cloister. The abbey, residence of a monastic community since 879, is a remarkable monument to the history of Catalonia, a marvel of Romanesque architecture and sculpture and, by its rebirth, a living monument in the 21st century. Towards 840 a community of Benedictine monks settled in Eixelada, in a gorge of the river Têt near the present Olette. In 878 a flood completely demolished this monastery. Under the monk Protais’ leadership, the survivors grouped together and remained at Cuxa, close to a church which was dedicated to Saint-Germain d’Auxerre and belonged to Protais. 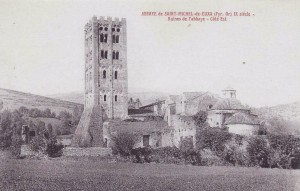 In 956, at the Count of Cerdanya’s instigation, Abbot Pons began the construction of the present great church. Completed in 974, it was consecrated by Abbot Garin, who specially came from Cluny. Its age makes it a rare monument, the largest preserved pre-Romanesque church in France. Its horseshoe arches, for a long time considered to be of Moslem inspiration, owe their origins to Classical antiquity, a legacy also shared by the Arabs. 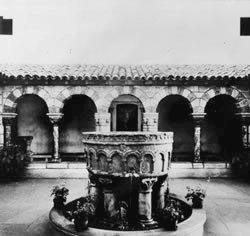 During the 11th century the Count of Cerdanya’s son Oliba, currently Abbot of Ripoll and Cuxa in 1008, founder of Montserrat, bishop of Vic and promoter of the Peace and Truce of God (the first public prohibition of violence in the feudal world) ruled over the Abbey for almost 40 years. He built the ambulatory around the Choir and, in the west of the abbey church, the crypt with above it the atrium and the Trinity Church. Today the only remains of this ensemble are one bell tower and the crypt with the Nativity rotunda (Pessebre). The latter consists of a spectacular circular barrel vault supported by a central pier. These constructions are entirely typical of early Romanesque architecture.

Towards 1130 a marble cloister was built under the Abbot Gregory marking the inception of a Romanesque school of sculpture in Roussillon. This school evolved throughout the 12th century. It is notable for the almost total absence of human figures: its preferred themes include delicately chiselled fantastic bestiary and plant motifs. In this period a rood screen comparable to that in Serrabona was built in Cuxa. Although this was destroyed in the 16th century, some fragments were preserved. Cloister and rood screen are masterpieces of western Romanesque sculpture.

In 1790, as a result of the annexion of the clergy’s possessions by the state, the last monks were evicted and the Abbey was sold. The church roof fell down, followed by the northern bell tower in 1838. The marbles were removed and were sold piecemeal. The last eight capitals disappeared in 1907; the sculptor G.G. Barnard exported them to the U.S.A. with many others (Today a ‘Cloître de Cuxa’ can be visited at the Cloisters in New York). 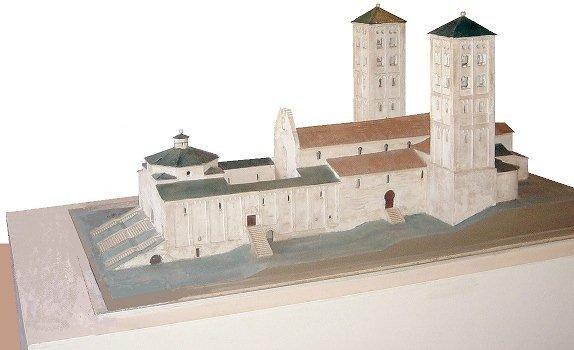 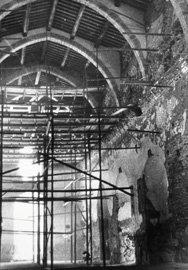 In 1919 new life was given to the ruins of Cuxa. The site was repurchased and placed at the disposal of the Cistercian monks of Fontfroide. They lived there until 1965. The Abbey’s restoration after 1945 was a real rebirth: the church was re-roofed, more than half of the cloister was rebuilt thanks to the rediscovery of some capitals, the crypts 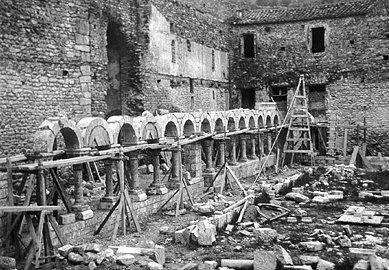 were cleared and the remains of the Trinity church were rediscovered and restored. In the meantime, in the 1950s, the famous Catalan cellist Pablo Casals, withdrawn from the world in Prades, gave concerts there and founded the festival which has since adopted his name.

From 1969 onwards the Cultural Association of Cuxa has brought the place to life with studies on Romanesque Art. A community of Benedictine monks from Montserrat continues a monastic life which began 11 centuries ago.