Saint-Michel de Cuxa is an extraordinary monument, encompassing the transition from pre-Romanesque to Romanesque art in the space of one generation.

From afar you can admire the beautiful 11th century bell tower with its four storeys. Its decoration of blind arcade bands called lombardes is characteristic of the early Romanesque architecture, as well as the rhythm of its piercings and their silhouette. These characteristics can also be found in north Italian buildings of the same period, implying a connection between the two areas.

Currently the visit to Cuxa starts at the crypt. As secret as a cave, its Nativity church (Nostra Senyora del Pessebre) invites meditation around its central pier, 7m in circumference, which supports the circular barrel vault. The standardisation of architectural vaults is another characteristic of the early Romanesque art in the 11th century. This one was built on wooden shutterings which have left their traces in the lime mortar. Between 1010 and 1040 Abbot Oliba erected the two bell towers and a western focal point consisting of two superimposed churches, in front of the great 10th century church.

Other vaulted areas from the same period extend around the Nativity crypt, located beneath the atrium which separated the upper (destroyed) Trinity church from the great pre-Romanesque church of St Michael.

We enter the church by the cloister. The pre-Romanesque church of St Michael is a large basilica built between 956 and 974 by the Abbots Pons and Garin. Its long nave and extensive transept are reminiscent of the great churches in Rome. The chevet consists of a large square apse and two rounded apse chapels encompassing the arms of the transept. Originally this huge building was not vaulted, but covered by timber beams.

The principal characteristic of the church is its horseshoe arches. This shape (a curve going beyond the semicircle) is particularly visible in the transept, the arcades of the nave having been 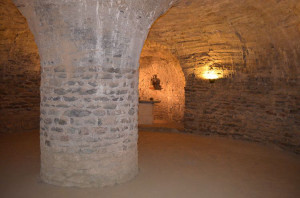 enlarged in the 16th century. The horseshoe arches, whose construction techniques continued to exist in one form or another until the Visigoth era, are a legacy from the late Classical period. The Arab Muslim civilization also drew inspiration from these forms, so that Saint-Michel de Cuxa was for a long time considered as being a Mozarabic church, influenced by Muslim art, notwithstanding the fact that the Arabs had left the area two centuries earlier.

The angles and columns of the great church were built with enormous, often recovered, ashlars and the walls were completed with rough, irregular stones. This construction technique differs from that of the early, 11th century, Romanesque architecture, where the stones, even if not cut, were nevertheless shaped, regularly coursed and similarly proportioned.

After a fire in the 14th century, the two bays of the choir were provided with ogive vaults. The roofing of the nave is modern; it was restored after 1950.

In the 11th century the great church was altered by the vaulting of its aisles, the construction of the bell towers on the extremities of the transept arms (the northern one fell down in 1838) and a kind of ambulatory around the 10th century square chevet with three new apse chapels.

We return to the cloister, rebuilt from 1949 to 1955 with the arcades and capitals which were still in Prades or in the possession of private persons. Originally the cloister was a closed quadrilateral, around which were grouped the buildings for the monks’ collective life: refectory, dormitory, chapter house… All these buildings disappeared after 1789. The cloister is doubtless Abbot Gregory’s work from the second quarter of the 12th century. It marks the rebirth of sculpture in the Romanesque art of this area and inaugurates the employment of marble. 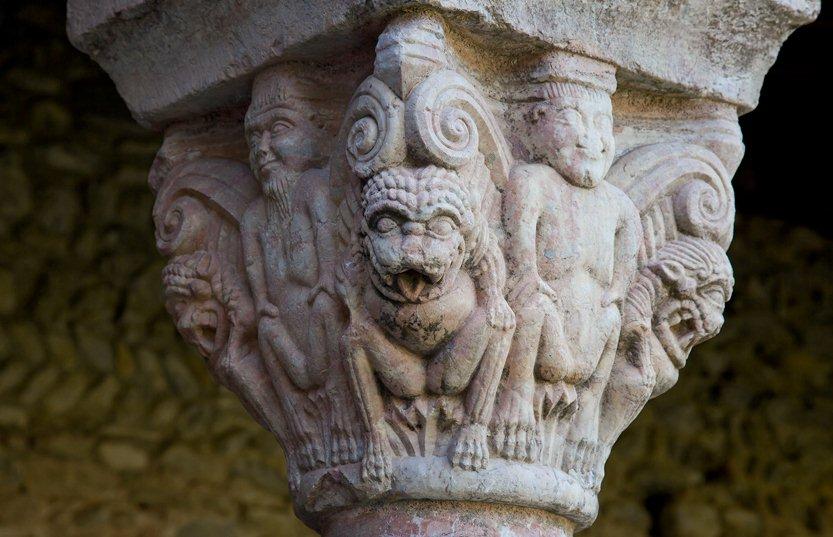 The ornamentation of the capitals is notable for the surprising absence of narrative subjects and human figures. It is mainly inspired by symbols, with a fantastic bestiary (lions, monkeys), monsters and plant motifs.

The reconstruction of the cloister also included capitals from the former rood screen whose purpose had been to mark out the space reserved for the monks. It was dismantled in the 16th century but some fragments were reused in the abbey, before they were further dispersed in the 19th century. We can see (in the isolated north-western angle) more narrative subjects, a bearded Christ, angels and seraphim. The present church doorway is also a frontage arch from the former rood screen. You can see on it the lion of St Mark (on the left) and the bull of St Lucas (on the right) and the whole decorative repertoire of the 12th century.